Please provide the following information and we will be in touch with you shortly.

Recognizing when a private family trust company (“PFTC”) is the ‘right’ planning tool is important. This case study has been created as a thought-provoking example of how a PFTC can be a viable solution for a family owning a privately held company with the desire of passing it to future generations.

A PFTC is a transition or succession option even if not all members of succeeding generations have an interest in actively participating in the company’s operations. Family members not actively engaged in management may continue to have a desire to own shares of the company even though they don’t receive a salary from the company as part of the operating team. As family members consider long-term trust planning as a strategy, a PFTC can prove to be an ideal trustee selection now and into the future…and here’s why:

The family started a private family trust company, ABC Services (“ABC”) to act as the corporate trustee of all trusts established by family members. In Ohio, by law, ABC can only provide services to “family members” which is a legally defined term including the lineal descendants of a common ancestor who is not more than ten generations removed. The definition includes spouses, spousal equivalents, adopted children, stepchildren, and foster children. In addition, ABC can serve family charities, family estates, key employees, and business entities wholly owned and operated by family members. However, ABC may not provide services to the public.

ABC was set up as a corporation with a governance structure uniquely tailored to the family’s philosophy. Most Directors on ABC’s Board were family members representing different family branches or groups. In addition, several independent directors served bringing an outside perspective to the Board for risk management. Also, family members comprised the Investment Committee as guided by an independent investment manager – a great educational opportunity. Ultimately, the Board and Committee positions provided a unique engagement opportunity for family members who may not be interested in being employed by the operating company, but with interests aligned with ABC’s services.

The Discretionary Distributions Committees (sometimes also referred to as the “Office of the Beneficiary”) were comprised of independent individuals based on IRS guidance. Members of the Discretionary Distribution Committees (“DDC”) made determinations of appropriate distributions to be made to beneficiaries and were provided with unique training on making these decisions in a thoughtful manner. They were also encouraged to develop a personal, almost mentor-like, relationship with the beneficiaries of the trusts they oversaw. Important to note is that over succeeding generations, it is likely that the primary point of connection to the family company may be through the DDC member as the beneficiary requests a discretionary distribution. This is based on a commonly held tenet that by the time a third generation has completed dynasty trust planning, as much as 80% of the next generation’s wealth will be held in trust.

Given the option of becoming a licensed (audited by the state banking regulators) or unlicensed (not regulated), the family members selected the unlicensed option. Although, for the protection of current and future family members, ABC operates “as if” it is licensed although not under the purview of the state banking regulators. Essentially, ABC reviewed the legal requirements of a licensed PFTC and determined which of the requirements it would follow. For example, in Ohio, a licensed family trust company is required to secure a Fidelity Bond of no less than $1M. ABC determined the risk mitigated by a Fidelity Bond was not a concern for ABC so they did not secure one. However, in Ohio, a licensed family trust company must set aside between $200,000-$500,000 in capital which may be comprised of privately held stock. ABC believed this to be a good corporate practice so they complied even though not legally required to do so. Again, ABC was able to tailor the PFTC based on the family’s philosophy. 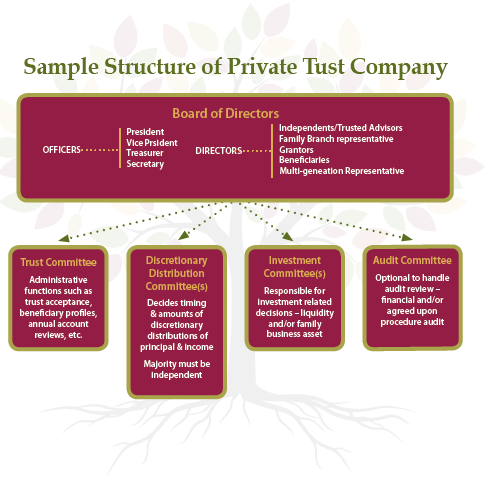 The PFTC has become a key entity in the family governance structure to assist in ensuring the family business remains private into the future and the family remains in control of the shares. Senior family members have remained engaged from a shareholder perspective even though they have moved the day-to-day company operations to the next generation. Family members who have not chosen to participate in the company operations continue to be part of the family legacy as beneficiaries of trusts holding shares of the family company which are under the management of the PFTC – keeping the family united across generations into the future. Keeping family members engaged as beneficiaries of the trusts has also reduced liquidity needs of the company to ‘buy out’ family members if they aren’t working at the company. Further, all family members can have the ‘peace of mind’ that the company can dedicate profits to the company without concern over redemption needs related to the payment of estate taxes which could have resulted in the necessity for the company to seek outside financing, or worse a sale of the company, to cover estate tax obligations.

As hoped for, numerous additional benefits of establishing the PFTC have been realized including the following:

Find us on:
Copyright © 2021 CLS Consulting, LLC. All rights reserved.